This popular soup known as Gazpacho comes from the Andalusia region of Spain. It is a great soup to have in the summer since it is served cold. Originally this soup was made as a blend combined with stale bread, olive oil, garlic with a bit of vinegar or water that gets pounded together with mortar. Then various different kinds of vegetables and almonds get added to this soup. The reason for the bread was that the name gazpacho is of Arabic origin and it means “soaked bread”.

The most popular variation of this soup has tomatoes in it and even though it is meant to be a cold soup there are places in Spain that serve it heated. Nowadays whenever anyone hears about Gazpacho they immediately associate it with a cold soup that has a vegetable or fruit base and spices added.

The origins of Gazpacho go back to Roman times when Roman soldiers took along dried bread, garlic, and vinegar in order to make the basics for this soup. This idea was taken by the Moors from Morocco across the way and they came up with a soup known as Ajo Blanco.  Before the discovery of the New World tomatoes and peppers were not available.

When Christopher Columbus went exploring he made sure to have this soup on his voyages and as a result of which brought back to Spain cucumbers, tomatoes, and different peppers for a different kind of Gazpacho.

My favorite kind of Gazpacho has tomatoes in it. People have begun exploring with this soup and now have begun also adding ingredients such as cantaloupe and watermelon. This soup has been honored with a day, so on December 6th, you can celebrate National Gazpacho Day.

When served cold Gazpacho should be chilled but not, iced. The traditional kind of soup is made in a mortar with bread that is a week old. The vegetables and bread get pounded into a paste after which tomatoes that have gone through a sieve so there are no seeds in the soup, olive oil, and vinegar are added. You must keep tasting the soup to get it just right.

Some of the variations of Gazpacho include Ajoblanco from the Granada and Malaga region of Spain. The soup is white with bread, almonds, at times grapes, olive oil, and plenty of garlic. Salmorejo comes from the Cordoba region it includes tomatoes, bread, oil, garlic, and vinegar. The tomatoes are skinned and pureed. The soup is served cold and garnished with Spanish Serrano ham and diced hard-boiled eggs.

On a final note, I started experimenting with gazpacho and if you are a seafood lover then you will really enjoy this. You can choose to make it spicy or not.  Take diced tomatoes, bell pepper, onions, garlic, and jalapeno. Put them in a bowl and add cherry tomatoes, olive oil. balsamic vinegar or wine vinegar, lime juice, and Worcestershire. Blend it all up in the blender. Taste for salt and pepper. Spoon the soup into bowls and add boiled shrimp. Then sprinkle it all with Parmesan cheese.

One thought on “When it Gets Hot Make Gazpacho”

Africa: Tales of Pirates and Fairies

Thu Oct 24 , 2019
Africa is the second largest continent in the world. It has a colorful history, flavored with mystery. If one wanted to write about this continent they could easily publish thousands of books and millions of articles. I have a pinboard on Pinterest which I named “Mother Africa”. As of today, […] 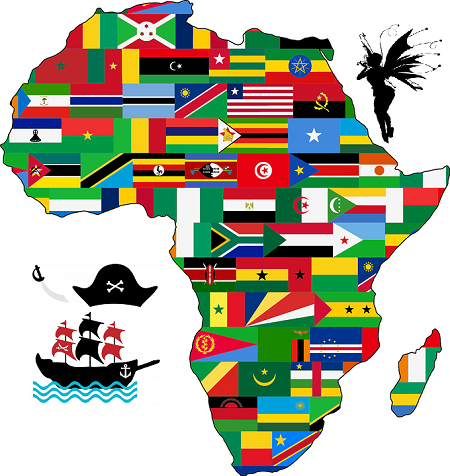